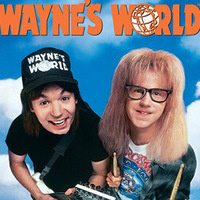 In the tradition of The Ten Commandments, Lawrence of Arabia and Gandhi comes a sweeping screen epic bursting with spectacle and drama... NOT! It’s Wayne’s World, the hilarious, party-down movie featuring rockin’ tunes, radical women and your most excellent hosts, Wayne Campbell (Mike Myers) and Garth Algar (Dana Carvey). When a sleazy television executive (Rob Lowe) offers the duo a big contract to tape their public-access show at his network, Wayne and Garth can’t believe their good fortune. But they soon discover the road from basement to big time is a gnarly one, fraught with danger, temptation and ragin’ party opportunities. (Penelope Spheeris, 1992, PG-13, 95 min.)

Gates open approximately 15 minutes prior. (Note: this is the 2nd film in a double feature.)