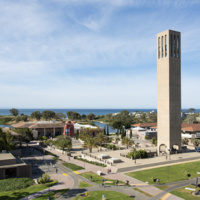 Students Junyu Deng, Emily O'Mahony, Julia Ong, and Jay Yin from UC Santa Barbara University Carillonist Wesley Arai's studio will present a recital from the carillon in UC Santa Barbara's Storke Tower on Sunday, November 21, 2021 at 10 am PT. Listeners are encouraged to bring a blanket or lawn chair to sit on the grass outside the tower during the recital.

This event is free and open to the public.