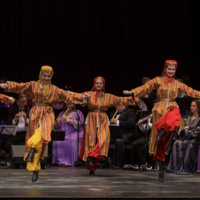 Directed by Scott Marcus, the UCSB Middle East Ensemble will present an evening of music and dance reflecting the great variety of cultures found in the Middle East on Saturday, March 7, 2020 at 7:30 pm in Lotte Lehmann Concert Hall. The program will feature extended sets of Greek music (introduced to the Ensemble by Voula Aldrich), Persian music (directed by Bahram Osqueezadeh), Tunisian music (directed by Jared Holton), and Kurdish, Turkish, and Zaza music from Turkey (introduced to the Ensemble by Nesrin Gurhan). Javid John will be solo vocalist for two of the songs. The Ensemble will also present a song by the most famous Arab singer of the 20th century, Umm Kulthum (c.1900-1975), featuring Steven Thomson. Bahram Osqueezadeh will also present an instrumental solo on the Persian santur.

As always, the Ensemble's Dance Company will perform a wonderful variety of dances, from northwestern Egypt, Cairo, Iran, and Zaza culture of Turkey, with choreographies by Cris! Basimah, Nesrin Gurhan, Shahrzad Khorsandi, and Egypt’s most famous dance choreographer, Mahmud Reda. The program will also feature a special solo dance by Elvan, a former core member of the Ensemble’s Dance Company.