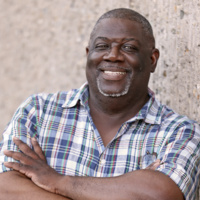 Directed by Victor Bell, the UC Santa Barbara Gospel Choir will present a virtual event titled, "The Virtual Gospel. An infusion of gospel music, gospel music history, and gospel testimonies," on Wednesday, March 17, 2021 at 6 pm PST as a YouTube Premiere via the Department of Music's YouTube channel. The production will feature special guests Daniel Ozan and Rhiann Joshua.

This video will be available to view as a YouTube Premiere on the Department of Music's YouTube channel (youtube.com/c/UCSantaBarbaraDepartmentofMusic). The direct link to the YouTube Premiere is youtu.be/NHwqI1MsauM.

Victor Bell’s unique gifts of writing, teaching, and directing make him stand out with respect among his peers. His gift has allowed him to move beyond the church walls and into many fields such as TV and film. He served as a music consultant for Stan Lathan (TV director, Sanford & Son, Fresh Prince) for such TV shows as The Steve Harvey Show (whenever Steve appeared to be playing the piano it was Victor behind the scenes playing), Cedric The Entertainer, Bernie Mac Show, Method & Red, All of Us, Key & Peele, and most recently, The Soul Man featuring Cedric the Entertainer & Niecy Nash. He was also music guest and director for the wedding of actor Blair Underwood. Mr. Bell is a tenured professor in the Department of Music at UC Santa Barbara.

Victor Bell & Halel was birthed in 1995, reminiscent of the early Kirk Franklin & The Family after Victor received instruction from the Lord to form a singing aggregation that would cause men and women to bless Him.

Mr. Bell is the founder and Senior Pastor/Teacher of Praise House Worship Center in Torrance, CA. He is married to Ronette Bell, and together they have four beautiful children.