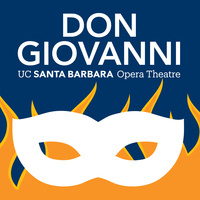 UC Santa Barbara Opera Theatre and the Department of Music will present a virtual performance of Wolfgang Amadeus Mozart’s two-act opera Don Giovanni on Friday, February 26, 2021 at 6 pm PST as a YouTube Premiere. Directed by UC Santa Barbara Associate Professor Dr. Isabel Bayrakdarian, the abridged version of the opera will be sung in the original Italian with English subtitles. The video will be free and available to the public via the Department of Music’s YouTube channel. Dr. Bayrakdarian will host a LIVE Q&A with the cast of Don Giovanni directly after the premiere from 7:30-8 pm PST via Zoom.

Don Giovanni features music by Wolfgang Amadeus Mozart and an Italian libretto by Lorenzo Da Ponte, whom Mozart also collaborated with for Le Nozze di Figaro (1786) and Così fan tutte (1790). Classified by Mozart as an opera buffa, Don Giovanni received its premiere on October 29, 1787 by the Prague Italian Opera at the National Theater, now called the Estates Theatre, in Prague, Czech Republic. Based on the legend of the notorious libertine Don Juan originally brought to life by the Spanish writer Tirso de Molina, the opera is set in Seville, Spain in the mid-18th century, and follows the demise of the shameless seducer Don Giovanni over the course of a mere 24 hours.

UC Santa Barbara Opera Theatre’s virtual production of Don Giovanni will be available to view as a YouTube Premiere on the Department of Music’s YouTube channel at youtu.be/-DKOno7vR9w on Friday, February 26, 2021 at 6 pm PST. Dr. Bayrakdarian will host a LIVE Q&A with the cast of Don Giovanni directly after the premiere from 7:30-8 pm PST via Zoom at ucsb.zoom.us/j/89935270317.

The award-winning UC Santa Barbara Opera Theatre Program offers promising young artists the opportunity to work with world-renowned faculty who have sung with many of the world’s major opera companies and orchestras. Undergraduate and graduate students participate in fully-staged operas, as well as productions of semi-staged opera scenes. Recent fully-staged productions include Wolfgang Amadeus Mozart’s Le Nozze di Figaro (2018) and the North American premiere of Franz Lehár’s The Mock Marriage (2019) at the historic Lobero Theatre in downtown Santa Barbara. Graduates of the UC Santa Barbara Voice Program have performed at festivals such as the Tanglewood Music Center, Music Academy of the West, Merola Opera Program, and the Chautauqua Music Festival, and have been admitted to graduate programs at the San Francisco Conservatory of Music, Peabody Conservatory, Northwestern University, and many more.

Creative team and cast bios are available at music.ucsb.edu/news/event/2171.