TV at the Pollock: Deadwood 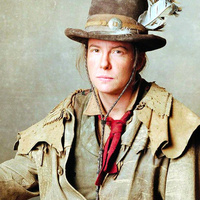 When the richest gold strike in U.S. history thrusts South Dakota’s Black Hills into the center of the nation’s get-rich-quick dreams, a throng of restless misfits converge on the outlaw town of Deadwood. Created by David Milch, the critically-acclaimed series ran for three seasons, and featured a talented ensemble cast playing the town’s colorful inhabitants, many of them based on historical figures. The Carsey-Wolf Center is delighted to welcome actress Robin Weigert, who played Calamity Jane in the series, for a screening of Deadwood season 1, episode 2 “Deep Water.” This episode takes place in the aftermath of a massacre, as suspicions arise about its true perpetrators. Local kingpin and saloon-keeper Al Swearengen (Ian McShane) takes a special interest in the health of its sole survivor, a young girl being tended by the unlikely team of Doc Cochran (Brad Dourif) and Calamity Jane (Robin Weigert).
Actress Robin Weigert will join moderator Emily Zinn for a post-screening discussion of the series and the episode.