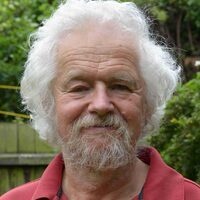 Simon Laughlin is Emeritus Professor of Neurobiology in the Department of Zoology at the University of Cambridge, UK. After he received his PhD from Australian National University, Prof. Laughlin had appointments at Australian National University, Freie Universität (Berlin) and Yale University. He has been a member of the faculty at the University of Cambridge since 1984. Dr. Laughlin takes a multi-disciplinary and comparative approach to solving problems of general interest in neuroscience. He focuses on neural design strategies, learning by experimenting on the insect visual system and modeling basic biophysical processes. In his work Dr. Laughlin has discovered design principles that apply to many brains because they are deeply rooted in biophysics, cell biology and information theory. Thus, by working on flies’ eyes, he has discovered how the human eye and brain are designed to process information efficiently. These discoveries go some way to explain how a brain that weighs 1.5 kilograms and uses as much energy as a domestic light bulb outperforms a supercomputer. His current interests include (1) energy, information and neural function, (2) principles of neural circuit design, and (3) the ecology and comparative physiology of vision. In 2000 he was elected a Fellow of the Royal Society (London). His book Principles of Neural Design (2015, MIT Press, co-authored with Peter Sterling) won two Prose awards for Best in Neuroscience and Best in Biology.