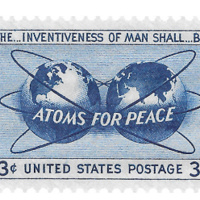 The Cold War ended long ago, but the language of science and freedom continues to shape public debates over the relationship between science and politics in the United States. From the late 1940s through the late 1960s, the U.S foreign policy establishment saw a particularly American way of thinking about “scientific freedom” as essential to winning the Cold War. In her new book, Freedom’s Laboratory, historian Audra J. Wolfe uses newly declassified documents to show how the U.S. scientific community came to embrace the ideal of apolitical, objective, international science, even while drawing ever closer to the national security establishment.
Audra J. Wolfe, Ph.D., is the author of Freedom’s Laboratory: The Cold War Struggle for the Soul of Science (2018) and Competing with the Soviets: Science, Technology, and the State in Cold War America (2013). A Philadelphia-based writer and editor, her work has appeared in the Washington Post, TheAtlantic.com, Slate, and the popular podcast American History Tellers, as well as more scholarly venues.