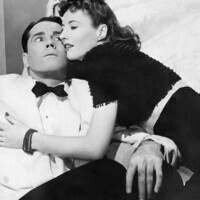 Preston Sturges’ daring and sexy romantic comedy The Lady Eve (1941) opens as a naturalist (Henry Fonda) emerges from the jungle after a year up the Amazon studying snakes. On board a ship, he is targeted by a female cardsharp (Barbara Stanwyck). When the two begin to fall in love, complications arise for both the con woman and the mark. Widely lauded as one of the best screwball films of all time, this film was a favorite of both Stanwyck and Fonda, who crackle and crack up as a duo. The film is the first of seven discussed in Stanley Cavell’s landmark study Pursuits of Happiness, in which he defined his “remarriage comedy” concept and explored philosophical ideas through Hollywood comedies.
Sandra Laugier (Philosophy, University of Paris 1 Panthéon-Sorbonne) and William Rothman (Cinema and Interactive Media, University of Miami) will join moderator Dominique Jullien (French and Italian Studies, UCSB) for a post-screening discussion.
This event is presented in conjunction with the symposium “Democratic Affections: Film, Philosophy, and Religion in the Thought of Stanley Cavell.” The symposium is co-sponsored by the Graduate Center for Literary Research, the Center for the Humanities & Social Change, the College of Letters and Sciences, the Dept. of Philosophy, the Interdisciplinary Humanities Center, the English Department’s Literature and the Mind Center, the Dept. of Religious Studies, the Dept. of Political Science, the Dept. of Film Studies, the Dept. of French and Italian, the Comparative Literature Program, and the Carsey-Wolf Center.