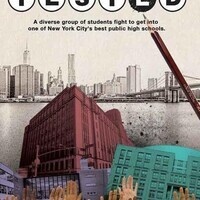 The racialized opportunity gap in America remains extreme. Nowhere is this more evident than our nation’s top public schools. In New York City, where Blacks and Hispanics make up 70% of the city’s school-aged population, they represent less than 5% at the city’s most elite public high schools. Meanwhile, Asian Americans make up as much as 73%. This documentary follows a dozen racially and socioeconomically diverse 8th graders as they fight for a seat at one of these schools. TESTED explores issues of access to a high-quality public education, affirmative action, and the model-minority myth. Post film discussion with director, Curtis Chin. 1h 30m