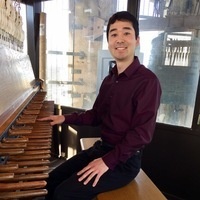 UC Santa Barbara University Carillonist Wesley Arai will present a recital from the carillon in UC Santa Barbara's Storke Tower on Sunday, September 12, 2021 at 2 pm PDT. Listeners are encouraged to bring a blanket or lawn chair to sit on the grass outside the tower during the recital.

This is a live, in-person event, which will also be streamed live via Facebook Live. See below for more information.

This performance will be streamed live from the Department of Music’s Facebook page!

To watch the recitalist perform, please “like” the UCSB Department of Music on Facebook by visiting facebook.com/UCSBDepartmentofMusic.

Once you have liked our page, please scroll down to the most recent post to view the live video. Please note that you must have a Facebook account to view the video. It is recommended that you turn off your phone’s sound if listening to the carillon live.