Subversives: Salt of the Earth 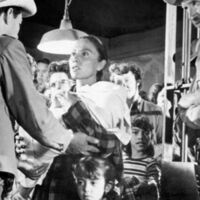 At the height of McCarthyism, director Herbert J. Biberman—one of the infamous “Hollywood Ten”—became transfixed by the strike against the Empire Zinc Company, led by Mexican-American miners and their families in Grant County, New Mexico. Together with several other blacklisted filmmakers, Biberman decided to create a feature film based on the events, casting and working alongside local nuevomexicano community members. The neorealist Salt of the Earth (1954) was unsurprisingly labeled as subversive and denounced in the U.S. as communist propaganda. Lead actress Rosaura Revueltas was even deported to Mexico before filming had finished. Upon its release, the film was widely banned in the U.S. but did find success in Mexico and Europe. The film has since become a classic of both Chicano and feminist cinemas.

Gabriel Meléndez (Distinguished Professor at the University of New Mexico and author of Hidden Chicano Cinema: Film Dramas in the Borderlands) will join moderator Stephen Borunda (Film and Media Studies, UCSB) for a discussion this important film. This event will not include a screening. Salt of the Earth is available for streaming on Amazon Prime, Kanopy, Pluto TV, and Tubi.

This virtual event will take place via Zoom. The event is free but prior registration is required.