Special Effects: They Shall Not Grow Old 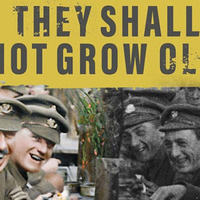 Drawing on period footage from England’s Imperial War Museum and BBC radio interviews with World War I soldiers, director Peter Jackson’s They Shall Not Grow Old (2018) deploys state-of-the-art digital restoration technology to reanimate some of the world’s earliest war footage. Released in commemoration of the war’s centennial and dedicated to Jackson’s own grandfather who fought in the war, the film is an astonishing portal to the past that offers viewers a surprisingly intimate view of the everyday lives of British infantrymen. As part of the Carsey-Wolf Center’s Special Effects series, this event will explore the notion of film restoration as a form of special effect; the film’s sophisticated use of colorization and audio synchronization with the assistance of lip readers render it a remarkable technological feat.
Elliot Travers (assistant editor, They Shall Not Grow Old) will join moderator Ross Melnick (Film and Media Studies, UCSB) for a post-screening discussion.