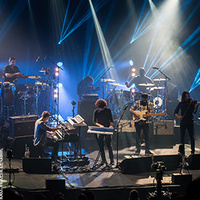 Direct from Walt Disney Concert Hall, Snarky Puppy comes to Santa Barbara with an irresistible mix of funk, fever and finesse. The Brooklyn-based collective features a revolving cast of up to 25 musicians who work with some of the biggest names in music (Kendrick Lamar, Erykah Badu, Snoop Dogg). Considered one of the hottest jazz/R&B outfits on the planet, Snarky Puppy is a three-time Grammy Award-winning group making “music for your brain and booty.” Don’t miss this rollicking evening with the most explosively funky mega-band in the land.
“A barnstorming, groove-centric instrumental act with a rabid fan base and a blithely unplaceable style. And if the name doesn’t ring a bell, it’s probably just a matter of time.” The New York Times
Note New Venue: This event (originally at UCSB Campbell Hall) has been moved to The Granada Theatre.