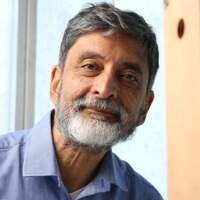 “Small Brains, Smart Minds: From Bees and Birds to UAVs”

Mandyam V. Srinivasan’s research focuses on the principles of visual processing, perception and cognition in simple natural systems—in particular, bees and birds—and on the application of these principles to machine vision and robotics. He is a professor at the Queensland Brain Institute and the School of ITEE at the University of Queensland. Srinivasan holds a B.E. in Electrical Engineering from Bangalore University, an M.E. in Electronics from the Indian Institute of Science, a Ph.D. in Engineering and Applied Science from Yale University, a D.Sc. in Neuroethology from the Australian National University, and an Honorary Doctorate from the University of Zürich. He was awarded the Prime Minister’s Science Prize in 2006, and is a Fellow of the Australian Academy of Science, of the World Academy of Sciences, of the Royal Society of London, and of the German Academy of Science, Leopoldina.