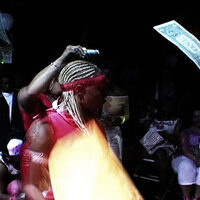 Leilah Weinraub’s Shakedown (2018) chronicles the “high-femme performances” in the Los Angeles-based underground black-lesbian strip club Shakedown. The New Yorker claims that “Shakedownis neither an experimental art film nor an anthropology of gay, black femme performance in L.A. Rather, Weinraub sought to capture a moment and turn it into cinema.”The film chronicles the explicit performances and personal relationships of the party’s dancers and organizers in the early 2000s, revealing that Shakedown was more than a strip club; as one of the few spaces for lesbian subculture, the club brought together and galvanised a community of freaks and queers of color.
Writer/director/producer Leilah Weinraubwill join moderator Mireille Miller-Young(Feminist Studies, UCSB) for a post-screening discussion.
This event is sponsored by the Carsey-Wolf Center and the Media Fields VII conference “Display: Excess and Visibility in Film, Media, and Culture.”
This event is free but a reservation is recommended in order to guarantee a seat.
Tickets will be released on Wednesday, March 13 at 11:00 AM.