Script to Screen: Game of Thrones 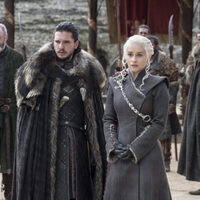 Based on George R.R. Martin’s best-selling fantasy series A Song of Ice and Fire, HBO’s epic Game of Thrones is notable for its high production values, expansive cast and engaging backstory. The story of a succession war between powerful families is set against a genre-subverting backdrop of gritty realism. Created by David Benioff and D.B. Weiss, Game of Thrones has become a widespread cultural phenomenon. In anticipation of the start of the eighth and final season of Game of Thrones (which begins on Sunday, April 14), the Carsey-Wolf Center invites you to experience the finale of Season 7, “The Dragon and the Wolf,” at the Pollock Theater.
Jeremy Podeswa, director of “The Dragon and the Wolf,” will join Pollock Theater Director Matt Ryan for a post-screening discussion.
This event is sponsored by the Carsey-Wolf Center, the Department of Film & Media Studies, the Scott Frank Fund for Screenwriting, the Rick Rosen Fund for Television Studies, and HBO.
This event is free but a reservation is recommended in order to guarantee a seat.
Tickets will be released on Monday, April 1st, 2019 at 11:00 AM.