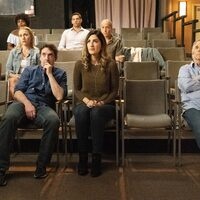 Dark comedy Barry stars Bill Hader as a depressed, low-rent hitman from the Midwest, who reluctantly travels to Los Angeles to execute a hit on an aspiring actor. Barry follows his “mark” into an acting class and ends up finding an accepting community in a group of eager hopefuls within the LA theater scene. He wants to start a new life as an actor, but his criminal past won’t let him walk away — can he find a way to balance both worlds?

Actor Henry Winkler will join Pollock Theater Director Matt Ryan for a discussion of his role in Barry and his distinguished career in entertainment. This event will not include a screening. Barry may be streamed in advance on HBO MAX.

Barry became one of my all-time favorite shows after the Season 1's penultimate episode, when Barry chooses to murder his nervous, loose-lipped friend instead of deal with the consequences of his own actions. After that, I had to get my girlfriend into the genius of the show as well, so I re-watched Season 1 with her and we watched Season 2 together. Needless to say, we cannot wait for Season 3 (Winkler’s tease of the amazing script he read was a top moment!).

So, when I saw that none other than Gene Cousineau aka Henry Winkler himself would be the final guest of the quarter, I thought we must have won the lottery! The Zoom format was awesome because my girlfriend, who currently lives in Cleveland, was able to join. And what a treat!!! I didn't know what to expect, but Winkler hit it out of the entire zip code. So many goodies, from the behind-the-scenes moments with Bill Hader and others to his ability to summon The Fonz at the drop of a hat all these years later, to his incredibly profound, true, and sincere nuggets of wisdom he offered the audience and the young, aspiring filmmakers in the crowd. A+++++!!

Very enjoyable, I worked with Henry for seven years on "Happy Days"as a writer/producer and was a co-showrunner the last season with Brian Levant. Henry is one of the great guys. I graduated from UC Santa Barbara as a History major in 1969. Keep up the good work.