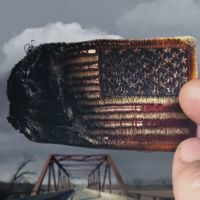 SURVIVING HOME is an intimate documentary that follows four U.S. military veterans from different generations over an eight year period as they rebuild their lives after war. Interwoven with veterans’ voices from across the country, their unique paths of healing and transformation shed light on longterm consequences of war and raise questions about the roots of war and societal cycles of violence.
A severely injured Iraq War veteran discovers a new voice that helps heal his wounds of war, as he and his wife struggle to keep their marriage alive. A Vietnam War veteran becomes a Buddhist monk in an effort to come to terms with the carnage and dehumanization of combat. A female Iraq War veteran fights through the effects of Military Sexual Trauma to take on the U.S. government in a class action lawsuit that could improve the lives of the next wave of men and women in uniform. A World War II veteran, who waited years to receive military benefits, spends time helping others with the support of a young, civically-minded Marine Corps veteran looking out for him.
Through perseverance, humor, inner reflection, courage, and the determination to help others, they overcome many challenges, yet they cannot foresee each bend in the road that lies ahead.
The screening will be followed by a panel discussion with filmmakers Jillian and Matthew Moul and local veterans, moderated by IHC Director Susan Derwin.
Copresented by UCSB Veterans and Military Services, the IHC’s Critical Mass series, UCSB Multicultural Center, and the Resource Center for Sexual and Gender Diversity. Screening made possible through a gift from the Gretler Foundation.