Saba In The Hub 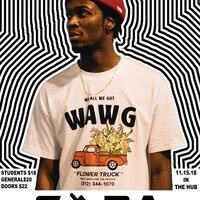 Saba is a 24 year old rapper and producer from Chicago’s Westside and is a member of the rap collective, Pivot Gang. Known for his aggressive delivery, high energy live performances, detailed lyrics, and outstanding production, Saba is able to connect to the staunchest old school hip hop head as well as the new generation of rap fans. This past spring, in April 2018, Saba released Care For Me which is dedicated to his late cousin and friend Walter Long Jr. aka John Walt. In 2015, Saba appeared on “Angels” by Chance the Rapper and in 2016 self-released the LP Bucket List Project. Saba has collaborated with many notable people including NoName, Smino, and Ravyn Lenae.