Roy Blair in The Hub 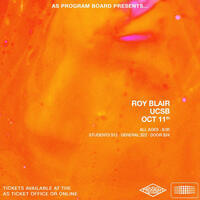 AS Program Board Presents… Roy Blair In The Hub!
Roy Blair is a 22-year-old, straight out of Pasadena, California. Before kicking off his solo career, Blair was Kevin Abstract’s (from BROCKHAMPTON) backup vocalist during the Death of an American Supermodel Tour.
After a feature on VICELAND’s American Boyband TV show, Blair quickly caught the attention of many new fans. Most recently, Blair has just dropped a three-song EP, “GRAFFITI.” Blair’s hits include “Thunder,” “Dennis,” “Jane,” and much more! With over 1.5 million monthly listeners and over 50 million streams, Blair is on the come-up!
From writing his first song in the fifth grade to releasing his debut album “Cat Heaven” in 2017, Blair has always shown his unique sense of beats and production. Blair’s sound fuses dreamy pop and hip hop beats and rhythms.
Spotify: open.spotify.com/artist/6Sa4YbwEdGlfVSJMF1Lp67?si=oNssBQbKQC-5N0gyTRHg8w
Twitter: twitter.com/royblair?s=17
Instagram: @royblair
Youtube: www.youtube.com/channel/UCa7naaG4ADIbHlz6QOz3MDA
Soundcloud: soundcloud.com/royblair
————————————————————
DOORS OPEN AT 8:30 PM.
UCSB STUDENTS $12 | GENERAL $22| DOORS $24
This show is open to all. For the student rate, please enter your access card number online or present your student ID to the ticketing office upon purchase.
AS Program Board is a student-operated non-profit organization that coordinates fun and educational events throughout the year. Some of our more well-known events include Free Tuesday Films, Storke Shows, Delirium, The Warm Up and Extravaganza.