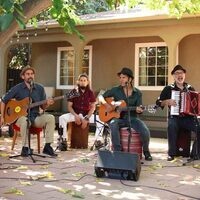 Los Pinguos came to the United States from Buenos Aires, Argentina, with a mixture of Latin rhythms, reggae, rumba flamenca and rock. The sound of the band has claimed fans worldwide. Los Pinguos have appeared on three of the famous Putumayo World Music compilation albums, Baila!, Radio Latino, and World Party. They have performed worldwide in places such as India, Bali, The Montreux Jazz Festival in Switzerland, Italy, Netherlands, Puerto Rico, Mexico, Canada, and throughout the United States. $5 for UCSB students and youth under 12; $15 for general admission.