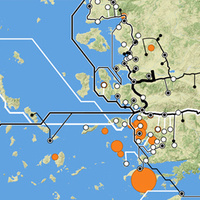 We live in a world of maps and networks. GPS enabled phones allow us to instantly locate ourselves on the earth’s surface, guide us to stores or restaurants, or announce to the world our location through social media. Likewise, programs like Google Earth and desktop Geographic Information Systems (GIS) have revolutionized our engagement with maps, map-making, and have challenged traditional notions of space and place.
The proliferation of GIS technologies and the “spatial turn” in digital humanities has also provided new avenues for challenging assumptions about the representations of past societies, the nature of empire, and the reach of imperial power. Despite their aesthetic beauty, traditional print maps, with clearly delineated static borders, often artificial naming conventions, and fixed viewpoints do not convey the complexity and uncertainty of the past.
Ancient societies and empires were far from static; they were networks of complex interactions and fierce contestation which unfolded in geographic space. This talk demonstrates how the use of new digital methodologies, gazetteers, and Linked Open Data (LOD) resources can be used to model and study these networks, and how new mapping techniques are transforming our understanding of ancient empire. Using the Attalid Kingdom as a guide, this talk examines the theory and practicalities of building an entity-relationship gazetteer and how to align it with LOD resources. It then addresses the construction of networks in desktop software, the impact of networks on cartography, and how new maps and digital models provided unique insights into the study of ancient Greek garrisons. The talk will then end with a brief overview of how Pleiades and other ancient world digital initiatives, including the Pelagios project’s Recogito platform, are developing new tools to enable the research and mapping of ancient networks.
Ryan Horne earned his Ph.D. at the University of North Carolina where he had the opportunity to work extensively with the Ancient World Mapping Center. Dr. Horne’s talk will explore how to integrate the study of maps and networks to study the ancient world, using the Hellenistic Attalid kingdom as a model.
Sponsored by the IHC’s Ancient Borderlands Research Focus Group