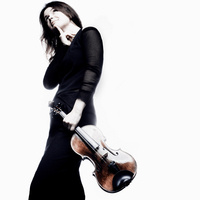 “She is the great violinist who not only can, but who dares.” – Mark Swed, Los Angeles Times

Firebrand Moldovan violinist Patricia Kopatchinskaja returns by popular demand following her standout West Coast recital debut last season. A megawatt star, “Kopatchinskaja now inhabits this realm of startling musical innovation with an absolute conviction that’s thrilling to behold” (Santa Barbara Independent). She and her frequent collaborator cellist Jay Campbell – praised by The New York Times for his “electrifying performances” which “conveyed every nuance” – have been credited for reviving the art of the string duo. Their diverse program spans a millennium, from 11th century traditional music to the world premiere of a new piece commissioned by A&L.

Hahn Hall at the Music Academy of the West