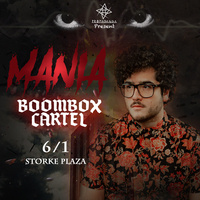 Blurring the lines between electronic and hip-hop with latin influences, internationally-recognized producer act Boombox Cartel has risen the ranks as an unparalleled force in the world of dance music. In 2017, Americo started touring the project globally, securing sold out shows and prime festival slots at Lollapalooza, Coachella, Electric Daisy Carnival, Ultra and more. Alongside releases on record labels such as Mad Decent, OWSLA, and Spinnin, Boombox Cartel has also been featured in prominent publications like Billboard, Noisey, Complex, and DJ MAG, and currently stands as the #1 ranked Mexican DJ in the world. The world of Boombox Cartel stands on the precipice of global domination.