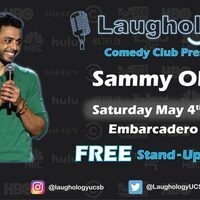 Come see the latest and greatest installment of the best stand-up comedy show in IV on Saturday May 4th!
Logan Gunzelman hosts
Alumnus Brent Pella features
Sammy Obeid Headlines:
Lebanese-Palestinian-Syrian-Italian-American, born in Oakland, California, Sammy Obeid is a math major turned comedian best known for his streak of performing 1,001 nights in a row. It began on December 26th, 2010, and concluded on September 21st, 2013– four days after an appearance on TBS’s Conan. Breaking the old world record on Day 731, Sammy set the new one at 1,001 Arabian Nights of Comedy.
Over the course of the streak, he appeared on NBC’s America’s Got Talent and advanced to the Las Vegas round, and became the first comedian to perform on The Food Network in Throwdown with Bobby Flay. Splitsider conducted an extensive interview with him entering the home stretch. LA Weekly praised Sammy’s “sheer force of will” in performance and lifestyle, and LA Mag recommended his show highly. He was profiled in TIME Magazine, followed soon after by an article in the New York Times. Published on his final day, it describes his material as “full of wordplay” and “clever misdirection.” (taken from www.sammyko.com/bio/)