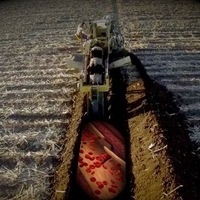 LAND HACKS: Masculine Media Anxiety Disorder (or 55 Film Locations Near Bakersfield), released in 2018, retraces the migration of the Oakies to rural California and visits 55 Hollywood film locations spanning the southeastern corridor of the state. Kern County, in California’s Central Valley, promotes itself as the “most red-state county in blue-state California” and “the Texas of California”; the county’s labor wars, land extraction economies, and media stereotypes combine to reveal rural folks and urban elites uneasily attempting to “hack” each other when they “partner” to make films. During production, Director John Caldwell suffered three heart attacks, and he uses the attacks as lenses to explore white male victimization in the Trump era. Caldwell isolates a series of 11 masculine anxieties—including muscle, stupidity, white, God and order—that fuel current mediascapes of resentment and disinformation.
Director John Caldwell will join moderator Jennifer Holt (Film and Media Studies, UCSB) for a post-screening discussion.
This event is sponsored by the Carsey-Wolf Center and the Department of Film and Media Studies.