Kings and Cripples in the Arthurian World 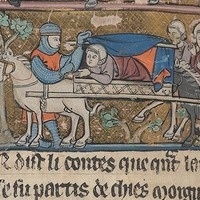 While the lived reality of disability in the Middle Ages was surely a wretched one, at the same time we encounter persistent associations between disabled and royal or aristocratic bodies in medieval culture, its imagery and narratives. Nowhere is this truer than in the Arthurian world, at whose core there lies a powerful but immobile figure, the Rich Fisher King. This talk looks at such linkage through Arthurian texts and illustrated manuscripts, especially the vast Lancelot Prose Cycle.