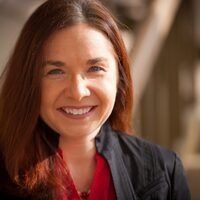 2019 United Nations’ Champion of the Earth Katharine Hayhoe is an atmospheric scientist who strives to understand what climate change means for people and the natural environment. The lead author for the U.S. National Climate Assessments under the Bush, Obama and Trump administrations, she is the Director of the Climate Science Center at Texas Tech University and has been named one of Time magazine’s 100 Most Influential People, Fortune’s World’s Greatest Leaders and Politico’s 50 thinkers, doers and visionaries transforming American politics. With a unique ability to build bridges across the political spectrum, Hayhoe will share her perspectives on how good science can inform sound decision-making.
Presented in association with the UCSB Department of Environmental Studies.
Part of the Forces of Nature series.

This talk was great. There was only one part I think Dr. Hayhoe could have improved, and that was her answer to the question from the audience about population control (this comes up often in climate change discussions, unfortunately). Bringing up "overpopulation" without discussing per capita consumption and emissions is not a useful way to think about climate change because of the disproportionate contribution of people from different places. Dr. Hayhoe's response was something wishy-washy about "supporting women" in a developing country to help them get access to birth control. In fact, while providing birth control to women in developing countries is something we should do because people want to make their own reproductive decisions and have access to reproductive healthcare, it is not a climate change solution. Rather, given the disproportionate contribution of people in developed countries to GHG emissions, *if* one wanted to reduce emissions by controlling birth rates, one would focus right here in the US, the global leader in per-capita CO2 emissions. Feels uncomfortable as a suggestion all of a sudden, doesn't it? The concept of reducing births to fix climate change is a racist and sexist myth.

I wish Dr. Hayhoe would have called this question out for what it was, set the audience member straight, and given a real answer about per capita contributions to climate change, consumption in developed countries, and rampant deregulation of industries that are responsible for far more emissions than any individual. Instead she gave an answer about a hypothetical mother in Malawi (I believe), a country in which the per capita CO2 emissions are < 1/200th of what they are in the US. Just wanted to voice that concern.

Fascinating and good lessons to help us bridge a divided America