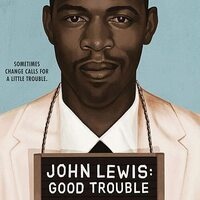 "An intimate and exceedingly timely portrait of Lewis that shows him as a tenacious fighter for a just cause, but also patient in the knowledge that the path to justice is long and never straight." San Francisco Chronicle

Directed by acclaimed filmmaker Dawn Porter, John Lewis: Good Trouble chronicles the life and career of the legendary civil rights activist and Democratic representative from Georgia and celebrates his 60-plus years of social activism and legislative action on civil rights, voting rights, gun control, health-care reform and immigration. Featuring both rare archival footage and exclusive interviews with the late congressman, Porter's film explores his childhood experiences, his inspiring family and his fateful meeting with Dr. Martin Luther King, Jr. in 1957. In addition to her interviews with Lewis and his family, Porter's primarily cinéma verité film also includes interviews with political leaders, congressional colleagues and other people who figured prominently in his life.

The film screening will be followed by a Q&A with filmmaker Dawn Porter about Representative Lewis' legacy of fearless protest and how we can keep his campaign for justice alive.