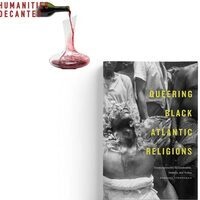 In 𝘘𝘶𝘦𝘦𝘳𝘪𝘯𝘨 𝘉𝘭𝘢𝘤𝘬 𝘈𝘵𝘭𝘢𝘯𝘵𝘪𝘤 𝘙𝘦𝘭𝘪𝘨𝘪𝘰𝘯𝘴, Roberto Strongman examines Haitian Vodou, Cuban Lucumí/Santería, and Brazilian Candomblé to demonstrate how religious rituals of trance possession allow humans to understand themselves as embodiments of the divine. In these rituals, the commingling of humans and the divine produces gender identities that are independent of biological sex. As opposed to the Cartesian view of the spirit as locked within the body, the body in Afro-diasporic religions is an open receptacle. Showing how trance possession is a primary aspect of almost all Afro-diasporic cultural production, Strongman articulates transcorporeality as a black, trans-Atlantic understanding of the human psyche, soul, and gender as multiple, removable, and external to the body.