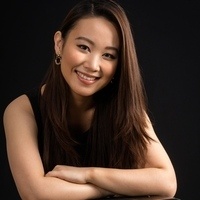 “Nothing beats the plaintive lusciousness of Wang’s instrument of choice... her Carnegie Hall debut [was] one of THE big accordion events of the year.” New York Music Daily

“A Chinese artist who honed her craft in Copenhagen is helping to promote the squeezebox’s potential in classical music.” Musical America, New Artist of the Month

With impeccable technique and captivating stage presence, classical accordionist Hanzhi Wang comes to Santa Barbara following debuts last season at Carnegie Hall and the Kennedy Center. Wang’s mastery of her instrument is complemented by her creative programming, spanning her transcriptions of Baroque music, delightful tangos and contemporary works written for the instrument and for Wang herself. A 2017 Young Concert Artists First Prize Winner, her unconventional embrace of keyboard repertoire makes her an enthralling standout among today’s rising stars.

Hahn Hall at the Music Academy of the West