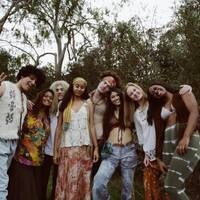 Written and set in 1968, HAIR the musical chronicles the lives of Berger, Claude, Sheila, and their group of young, activist, long-haired hippie friends as they navigate the struggles of living with the draft and war in Vietnam. Originally known for being a controversial musical – HAIR illustrated the reality of life in the late 60’s including drug use, free-love, racial tensions, and their love/hate relationship for their own country. Now, fifty years later, this musical is more timely than ever.
Featuring hit songs such as “Aquarius,” “Good Morning Starshine,” and “Let the Sunshine In,” HAIR is a rock musical with heart that reminds audiences how far we’ve come and how much work there is still to do.