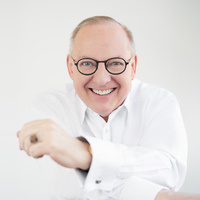 The Department of Music will present a Guest Artist Masterclass with conductor Nic McGegan on Friday, November 12, 2021 at 11 am in Room 1145 on the UC Santa Barbara campus. Students from the Voice and Keyboard programs will perform. An "expert in 18th century style” (The New Yorker), McGegan has dedicated five decades to conducting. The 2019/20 season marked the end of his 34-year tenure as Music Director of Philharmonia Baroque Orchestra and Chorale, for which he is now Music Director Laureate. He is Principal Guest Conductor of the Pasadena Symphony and Hungary’s Capella Savaria.

All patrons 12 years of age and older must show proof of being fully vaccinated* OR provide a negative COVID-19 medical test result (PCR or antigen) taken within 72 hours of the event. Over-the-counter or at-home tests will not be accepted. All patrons must also present a state-issued photo ID in addition to their proof of vaccination/negative test result (photo ID is not required for minors who are accompanied by an adult).

Masks are required in indoor spaces at all times, regardless of vaccination status. Patrons must bring and wear their own face coverings that fully cover both the nose and mouth. Masks are also strongly encouraged at outdoor venues, particularly where social distancing is not an option. Patrons may be asked to leave a venue if they are not adhering to Department of Music health and safety guidelines.

As he embarks on his sixth decade on the podium, Nic McGegan — long hailed as “one of the finest baroque conductors of his generation” (The Independent) and “an expert in 18th-century style” (The New Yorker) — is recognized for his probing and revelatory explorations of music of all periods. The 2019/20 season marked the end of his 34-year tenure as Music Director of Philharmonia Baroque Orchestra and Chorale, for which he is now Music Director Laureate. He is Principal Guest Conductor of the Pasadena Symphony and Hungary’s Capella Savaria. At home in opera houses, McGegan shone new light on close to twenty Handel operas as the Artistic Director and conductor at Germany‘s Göttingen Handel Festival for 20 years (1991-2001), and the Mozart canon as Principal Guest Conductor at Scottish Opera in the 1990s. He was also Principal Conductor of Sweden’s Drottningholm Court Theatre from 1993-1996.

Best known as a baroque and classical specialist, McGegan’s approach — intelligent, infused with joy and never dogmatic, along with an ability to engage players and audiences alike  -- has made him a pioneer in broadening the reach of historically informed practice beyond the world of period ensembles to conventional symphonic forces. His guest-conducting appearances with major orchestras — including the New York, Los Angeles, and Hong Kong Philharmonics; the Chicago, Dallas, Milwaukee, Toronto, Sydney, and New Zealand Symphonies; the Philadelphia Orchestra; the Royal Northern Sinfonia and Scottish Chamber Orchestras; and the Amsterdam Concertgebouw — often feature Baroque repertoire alongside Classical, Romantic, 20th-century and even brand-new works. He has led performances of Mendelssohn, Sibelius, Britten, Bach and Handel with the Utah Symphony; Poulenc and Mozart with the City of Birmingham Symphony Orchestra; and the premiere of Stephen Hough’s Missa Mirabilis with the Indianapolis Symphony Orchestra, paired with Haydn, Brahms and Mendelssohn. He collaborates frequently with the Mark Morris Dance Group, including the premiere productions of Rameau’s Platée and Handel’s Acis and Galatea.

His 19/20 guest bookings in North America included his returns to the Cleveland Orchestra and the Houston, Baltimore, St. Louis, and New Jersey Symphonies. He also resumed his long tradition of concerts at the Hollywood Bowl with an all-Mozart program in fall 2019, and rejoined the Los Angeles Chamber Orchestra in the autumn for a program of Rameau, Mozart, and Schubert. Abroad, McGegan led the Royal Scottish National Orchestra and made guest appearances with the Szczecin and Wroclaw Philharmonics. Summer festival appearances included his annual visit to Aspen and La Jolla. Finally, Mr. McGegan visited the Juilliard School to conduct multiple concerts in New York. The plan to take one of those programs, Handel’s Rinaldo, abroad to Göttingen in honor of the Handel Festival’s centenary was a victim of the COVID-19 pandemic and postponed to the 2021 season.

McGegan’s prolific discography includes more than 100 releases spanning five decades. Having recorded over 50 albums of Handel, McGegan has explored the depths of the composer’s output with a dozen oratorios and close to twenty of his operas. Since the 1980s, more than twenty of his recordings have been with Hungary’s Capella Savaria on the Hungaroton label, including groundbreaking opera and oratorio recordings of repertoire by Handel, Monteverdi, Scarlatti, Telemann and Vivaldi. Recently, the collaboration has produced albums of Kraus, Mendelssohn, Schubert, a 2-CD set of the complete Mozart violin concerti, and Haydn’s Symphonies 79, 80, and 81. McGegan has also released two recent albums with the Swedish Chamber Orchestra under the BIS label: Josef Mysliveček’s Complete Music for Keyboard with soloist Clare Hammond and an album of early horn concertos with soloist Alec Frank-Gemmill. His extensive discography with Philharmonia  Baroque includes two GRAMMY nominees, Handel’s Susana and Haydn’s Symphonies 104, 88, and 101.

Mr. McGegan is committed to the next generation of musicians, frequently conducting and coaching students in residencies and engagements at Yale University, the Juilliard School, Harvard University, the Colburn School, Aspen Music Festival and School, Sarasota Music Festival, and the Music Academy of the West. He has been awarded the honorary degree of Doctor of Music by the San Francisco Conservatory of Music; an honorary professorship at Georg-August University, Göttingen; and in 2016 was the Christoph Wolff Distinguished Visiting Scholar at Harvard. McGegan’s fun and informative lectures have delighted audiences at Juilliard, Yale Center for British Arts, American Handel Society, and San Francisco Conservatory.

English-born, Nic McGegan was educated at Cambridge and Oxford. He was made an Officer of the Most Excellent Order of the British Empire (OBE) “for services to music overseas.” Other awards include the Halle Handel Prize; the Order of Merit of the State of Lower Saxony (Germany); the Medal of Honour of the City of Göttingen, and a declaration of Nicholas McGegan Day, by the Mayor of San Francisco in recognition of his work with Philharmonia.