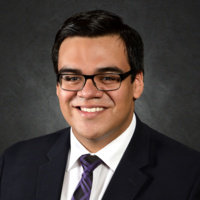 David Torres, a graduate student in the Choral Conducting Program, will present a Doctor of Musical Arts recital, titled "Coming Home," with members of Vocal Affinity on Monday, August 2, 2021 at 6 pm PDT as a YouTube Premiere via the Department of Music's YouTube channel. The program will include Mack Wilburg's Bound for the Promised Land; Don MacDonald's When the Earth Stands Still; William Billings' David’s Lamentation; Robert Manookin's O Lord, I Have Trusted in Thee; and more. Torres is a student of UC Santa Barbara Sorensen Director of Choral Music Dr. Nicole Lamartine.

Bound for the Promised Land

When the Earth Stands Still

O Lord, I Have Trusted in Thee

The Spirit of God

David Torres brings thirteen years’ experience to the podium. His vocal and instrumental ensembles have appeared in California, Idaho, Washington, and Utah and been heard worldwide through PBS broadcast and internationally televised events. David served as adjunct faculty in the Department of Music at BYU-Idaho, teaching the conducting program. David currently conducts the elite Vocal Affinity which was recently featured at the NWACDA Regional Conference in 2020. He has a passion for teaching, creating soul-impacting music, and pursuing the highest levels of excellence. David is currently a DMA candidate in Choral Conducting under the direction of Dr. Nicole Lamartine, and working toward a long career in collegiate choral music and hopes to mentor future conductors.