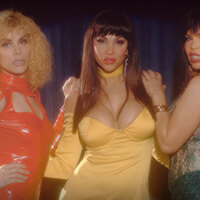 Veneno tells the epic story of Cristina Ortiz Rodríguez, or “La Veneno,” a transgender icon and media personality who rocketed to fame in mid-1990s Spain following an appearance on a popular late night talk show. Across eight episodes, Veneno flips back and forth across decades, detailing her complicated childhood in the 1960s, her later renown as a sex worker in Madrid, her rise to public fame on television, and her subsequent years relaying her life story to her wide-eyed teenage confidant and eventual biographer Valeria Vegas (Lola Rodríguez). Three cast members — Jedet, Daniela Santiago, and Isabel Torres — lovingly bring Veneno to life, conveying the considerable impact that she had on the queer community, transgender fans, sex workers, and those who identified with her internal and external struggles waged in the public eye. Veneno’s emotionally stirring narrative, told in a variety of striking visual styles and tones, pays tribute to an iconic life and to the chosen families that helped her discover her power.

Veneno star Daniela Santiago will join Jennifer Tyburczy (Feminist Studies, UCSB) in a virtual discussion of the show. This event will not include a screening. All eight episodes of the full miniseries are available to stream on HBO Max.