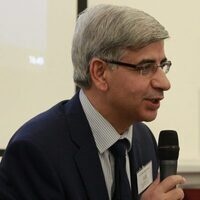 The Department of Global Studies' Colloquium Series is a lecture series, which has been made possible by the generosity of the Orfalea Endowment for the Master's Program in Global Studies.  The Colloquium Series strives to open and explore a wide range of interdisciplinary debates and their interaction and engagement with the global, hosting new guest speakers each quarter from UCSB and beyond.  The upcoming event will be hosted via Zoom on Wednesday, May 19th at 12:30pm. Zoom link is https://ucsb.zoom.us/j/84246564996 (Meeting ID: 842 4656 4996). Please see below for the featured talk:

While the Internet continues to be dominated by the United States in terms of its infrastructure, economics and governance, this domination is increasingly being challenged by the BRICS (Brazil, Russian, India, China and South Africa) countries, notably China, Russia and India. China already has the world’s largest Internet population, followed by India, primarily driven by mobile communications. With the world becoming increasingly mobile, networked and digitized, it is suggested that the BRICS communication flows will help to pluralize information and communication agendas and help create a new global communication order, leading to a de-Americanization of the Internet. The BRICS nations are playing an important role in this process, given their growing presence and assertiveness related to global cyber-issues, despite some strong divergences within the group. The paper discusses the process of de-Americanization within five domains: infrastructure, commerce, regulation, weaponization and surveillance of cyber space, and the developmental dimensions of the Internet. In all five domains, the contributions of the BRICS nations are delineated, especially in relation to the dominant agenda setters for the Internet, namely the US and the digital corporations based there.