Global Studies Colloquium: "The global and the visual: Images shape people’s common sense of the global" 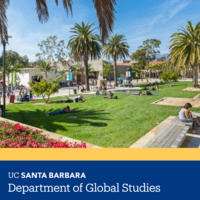 The Department of Global Studies' Colloquium Series is a lecture series, which has been made possible by the generosity of the Orfalea Endowment for the Master's Program in Global Studies.  The Colloquium Series strives to open and explore a wide range of interdisciplinary debates and their interaction and engagement with the global, hosting new guest speakers each quarter from UCSB and beyond.  The upcoming event will be hosted via Zoom on Wednesday, January 27th at 12:30pm. Zoom link is https://ucsb.zoom.us/j/84246564996 (Meeting ID: 842 4656 4996). Please see below for the featured talk:

The global and the visual: Images shape people’s common sense of the global

We live in a globalizing world and mediatized society in which artificial intelligence trains computers to interpret and understand the visual world (computer vision technology) and Deep Learning software creates images from scratch. As a result, visual images dominate the world by shaping the way in which we perceive and understand it. Yet, mainstream scholarship of ‘the global’ is still mainly produced by means of a textual-philosophical approach that fails to capture this. In this lecture, while not disregarding the importance of the economic and political dimensions of globalization and in understanding the material and ideational process of change and transformation as complex, ideologically fragmented, and occasionally contradictory, I argue for a more inclusive visual-discursive approach to the global by interrogating the connection between ‘globalization’ and ‘visuality’. In understanding aesthetics as a distinct mode of political thinking and by means of a transdisciplinary global approach, photographic fieldwork and the method of ‘global iconology’, this talk focuses on current processes of symbolic and social re-spatialization of the world. The argument is made through a body of still and moving images drawn from The Visual Archive Project of the Global Imaginary, some of which are critically analyzed and interpreted through the lenses of sociopolitical theory. Although these images are limited in their representation of people, places, and identities, I argue that they are still constitutive of the visual regime of representation and signification of the global and for this reason they should be taken into consideration. I stress the importance of the visual dimension of globalization and the need to take images seriously. It also discusses the ‘surplus value’ global images generate, as well as their weakness.

Dr Tommaso Durante is Associate Lecturer in global media studies in the School of Culture and Communication at the University of Melbourne (2019-2020). He has previously taught global studies at RMIT University, Melbourne (2014-2018) and at the Center for Global Politics of Freie Universität Berlin, Germany. In 2017, he taught methods for research on globalization at the Global and European Studies Institute (GESI), Leipzig University. His research is located between history and theory at the crossroads of global, urban, and media studies. He is interested in the aesthetics of globalization, globalization and mediatization, theories of the social imaginary, theories of ideologies, and visual methodologies. He is the author of several chapters and articles, including The Global Imaginary in Theory and Practice (The Oxford Research Centre in the Humanities, 2020). He is also an award-winning visual artist. His academic writing is archived by ORCID. His research activities can be seen at The Visual Archive Project of the Global Imaginary (2009- ) and at Global Visual Politics (2017- ).