Global Studies Colloquium Series: "As China Becomes an Economic and Technological World Power, the US Responds With a Trade War" 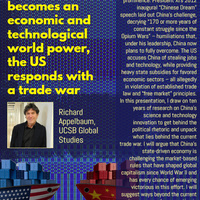 The Department of Global Studies Colloquium Series in conjunction with the Orfalea Endowment for the Master's Program is proud to present our next guest presentation by Professor Emeritus Rich Appelbaum:

As China Becomes an Economic and Technological World Power, the US Responds With a Trade War

In China, the Trump Administration’s trade war with China is viewed as a naked geopolitical effort to thwart China’s inevitable rise to global prominence. President Xi’s 2012 inaugural “Chinese Dream” speech” clearly laid out China’s challenge when he decried “the 170 or more years of constant struggle since the Opium Wars” – humiliations that, under his leadership, China now plans to fully overcome, and has the scientific and technological heft to do so. The US accuses China of stealing jobs and technology while providing heavy state subsidies for favored economic sectors – all allegedly in violation of established trade law and “free market” principles. In this presentation I draw on ten years of research on China’s science and technology innovation, in an effort to get behind the political rhetoric and unpack what lies behind the current trade war. I will argue that China’s state-driven economy is challenging the market-based rules that have shaped global capitalism since World War II – and that China has every chance of emerging victorious in this effort. I will suggest ways beyond the current impasse – and urge caution in the face of what I regard as an effort by the Trump administration to recast China as a dangerous enemy that must be contained, at all cost.

Richard Appelbaum is Professor Emeritus and former MacArthur Foundation Chair in Global & International Studies and Sociology at UCSB. He was co-Principle Investigator at UCSB’s NSF-funded Center for Nanotechnology in Society, where he led an international research team in a ten-year study of China as an emerging science and technology power. His most recent books are Innovation in China: Challenging the Global Science and Technology System (Polity Press, 2018), and Achieving Workers’ Rights in the Global Economy (Cornell University Press, 2016).