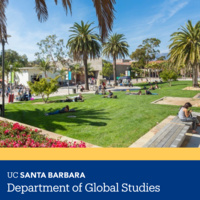 The Department of Global Studies' Colloquium Series is a lecture series, which has been made possible by the generosity of the Orfalea Endowment for the Master's Program in Global Studies.  The Colloquium Series strives to open and explore a wide range of interdisciplinary debates and their interaction and engagement with the global, hosting new guest speakers each quarter from UCSB and beyond.  The upcoming event will be hosted via Zoom on Wednesday, January 13th at 12:30pm. Zoom link is https://ucsb.zoom.us/j/84246564996 (Meeting ID: 842 4656 4996). Please see below for the featured talk:

Nick Jepson, In China’s wake: How the commodity boom transformed development strategies in the global South

In the early years of the 21st century, breakneck resource-intensive growth in China stimulated a boom of unprecedented magnitude and duration in world metals and energy markets. Meanwhile, resource-rich governments in the global South from Angola to Bolivia began to advance a range of new development strategies, with a number of states breaking from the neoliberal orthodoxies to which they had long appeared tied. This talk illustrates the causal connections between these phenomena. I argue that over the boom years Chinese demand not only transformed global commodity markets, but in so doing substantially insulated southern resource-exporters from policy discipline previously imposed by mobile capital, donors and international financial institutions. Drawing on 15 country-cases, I present a typology comprising five distinct political-economic directions of travel which emerged among resource-exporting states under these boom conditions. Each type corresponds to a particular pattern of domestic state-society relations and three of the five represent substantive breaks with neoliberalization. With the boom in commodity prices ending around 2015, these experiments have subsequently met a variety of fates. Nevertheless, I argue that this episode should be seen as similar in significance to the period of the New International Economic Order in the 1970s, with both demonstrating how changes in global market conditions can shift the parameters and possibilities for development at multiple scales. The 2000s commodity boom further provides a window into the ways China’s growing economic gravitational pull continues to reshape the circuits of global capital.

Nick Jepson is a Leverhulme Research Fellow at the University of Manchester’s Global Development Institute. His work explores the implications of the rise of China for capitalism and development in the rest of the world, particularly Latin America, Sub-Saharan Africa and latterly Central and Eastern Europe. His recent book In China’s Wake (Columbia University Press) examines how the China-driven commodity boom affected state-society relations and created new spaces for development in natural resource exporting countries. His current project looks at how China’s emergence as a bilateral creditor is challenging existing systems of global financial governance, especially in the context of the current sovereign debt crisis. Jepson is a member of the steering committee for the European Union's China in Europe Research Network (CHERN) and leads the working group on financial investments, services and speculation. His research has been funded by the Leverhulme Trust, the UK Economic and Social Research Council and the Hallsworth Fund. Jepson holds a PhD in global political economy from the University of Bristol. He has been a visiting scholar at the universities of California at Santa Barbara and Wisconsin-Madison and, in addition to the UK, studied in Germany (Freiburg), India (JNU), South Africa (UKZN) and Argentina (UBA).