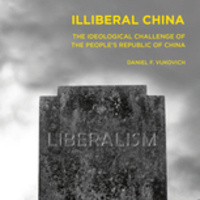 "Illiberal Politics East and West: Thinking Through the Conjuncture via Hong Kong"

The Department of Global Studies' Colloquium Series is a lecture and lunch series, which has been made possible by the generosity of the Orfalea Endowment for the Master's Program in Global Studies.  The Colloquium Series strives to open and explore a wide range of interdisciplinary debates and their interaction and engagement with the global, hosting new guest speakers each quarter from UCSB and beyond.  The upcoming event will be hosted in the SSMS 2001 conference room in the Global Studies Department on Thursday, January 30th at 12:30pm. Please see below for the featured talk:

"Illiberal Politics East and West: Thinking Through the Conjuncture via Hong Kong"

In this talk I draw on Illiberal China: The Ideological Challenge of the PRC (2019) as well as recent work on the Hong Kong protests of 2019 (“A City and a SAR on Fire,” Critical Asian Studies, 2019). I present lesser known aspects of the protests as well as of the ‘intellectual political cultures’ at work in Hong Kong and China, so as to arrive at a less mediatized analysis of the conjuncture in the SAR and globally. The fate of liberalism—its degradation into an economistic and administrative neoliberalism or austerity, on the one hand, and the anachronistic if not reactionary quality of political liberalism, on the other, is sharply revealed not only by Brexit and Trumpism but in Hong Kong’s democratic opposition, for lack of a better term. What the PRC presents, on the other hand, is an authoritarian illiberalism and quasi-liberal economism, but also a ‘statist’ discourse, organizational capacity, and redistributive ‘economic planning’ politics.  If the latter aspects of mainland politics should not be easily dismissed, the putatively democratic nature of Hong Kong’s opposition should not be so easily celebrated. The overall conjuncture may be described as one of stasis and stagnation. But if liberalism as much as traditional socialism have faded or degraded,  what remains are global problems that cannot be cured through localism/nativism but through empowered state capacities and organizational powers, something that the Party state for one has not completely abandoned.

Professor Daniel Vukovich (胡德) works at Hong Kong University, directs the MA program in literary and cultural studies, and serves the Center for Globalization and Culture. He is the author of China and Orientalism: Western knowledge production and the PRC (Routledge 2012) and Illiberal China: The ideological challenge of the PRC (Palgrave 2019) as well as numerous articles and essays. He is currently working on After Autonomy, a book which begins with the historical fate of Hong Kong, liberalism and post-colonial theory. He received his PhD in English at the University of Illinois and the Unit for Criticism. In a previous life he taught at a technical college in upper Appalachia.