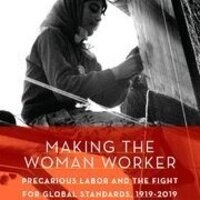 The Department of Global Studies' Colloquium Series is a lecture and lunch series, which has been made possible by the generosity of the Orfalea Endowment for the Master's Program in Global Studies.  The Colloquium Series strives to open and explore a wide range of interdisciplinary debates and their interaction and engagement with the global, hosting new guest speakers each quarter from UCSB and beyond.  The upcoming event will be hosted in the SSMS 2001 conference room in the Global Studies Department on Thursday, January 16th at 12:30pm. Please see below for the featured talk:

"'Indispensable to All Working Women and to Mothers in the Home': Global labor standards and the quest for social justice, 1919-2019"

“Indispensable to All Working Women and to Mothers in the Home”: that is how the French organizer of garment outworkers Jeanne Bouvier characterized a proposal for an eight hour day, forty-eight hour week which a century ago became Convention No.1 of the newly formed International Labor Organization (ILO). In differentiating “mother in the home” from “all working women,” Bouvier reinforced the separating of mother work from the world of employment that has haunted the formulation of global labor standards. This binary—what some theorists refer to as productive and reproductive labor, others as paid and unpaid work and the ILO as work and family responsibilities—cordoned off care from employment. Until the 2000s, paid care work mostly stood outside of ILO deliberations while unpaid family care became a concern as a means to enhance labor force participation and thus reinforce the valuing of care as a special kind of activity, one performed out of love or duty, that loses its affective-ness when commodified to allow others to go out to work. With the assumption that any woman can perform it and the prevalence of those from despised or “othered” castes, classes, and race/ethnicities undertaking its particularly dirty and physical aspects, the labor of care has come cheap, even when paid rather than embraced—or forced.

By tracing the construction of the woman worker under global labor standards, this talk probes paths to equality between men and women and among women amid regimes of inequality. Most ILO standards were facially gender neutral with gendered and racialized impacts. Countering the vicissitudes of the market, labor standards set perimeters to exploitation associated with employment. They defined what work is and who is a worker, seeking to formalize the informal through rules for the workplace. But some standards applied only to certain workers, singled out by gender, occupation, or geographic location, the latter referring to workers and subsistence producers in colonialized places racialized by white Western Europeans, as well as indigenous peoples facing dispossession of land and livelihoods. These standards policed morality, sexuality, and the organization of social life as well as promoted the civilizing mission and development.  Over time global labor standards also served as mobilizing and organizing devices for those previously outside standard employment: home-based laborers and household and care workers, whose demands for rights and recognition have upended the traditional structure of the ILO. With the unraveling of the employer-employee relationship under global supply chains and the fissured workplace, the past of feminized labor illuminates the future of work. Whether the new care work economy, touted by the ILO as central for gender equality, merely relabels the old inequalities will depend on the struggles waged in its name.

Professor Eileen Boris writes on the home as a workplace and racialized gender and the state. She is Hull Professor and Distinguished Professor of Feminist Studies, History, Black Studies, and Global Studies, UCSB. Her latest book is Making the Woman Worker: Precarious Labor and the Fight for Global Standards, 1919-2019 (Oxford, 2019). Other works include the prize-winning monographs Home to Work: Motherhood and the Politics of Industrial Homework in the United States (Cambridge University Press, 1994) and Caring for America: Home Health Workers in the Shadow of the Welfare State, co-authored with Jennifer Klein (Oxford, 2012, 2015). She is co-editor with Rhacel Parreñas of Intimate Labors: Cultures, Technologies, and the Politics of Care (Stanford University Press, 2010) and with Dorothea Hoehtker and Susan Zimmermann, Women’s ILO: Transnational Networks, Global Labor Standards, and Gender Equity (Brill and ILO, 2018). Her public writings have appeared in New York Times, The American Prospect, Time, the Nation, Al-Jazeera America, Huffington Post, New Labor Forum, Dissent, and Labor Notes. The President of the International Federation for Research in Women’s History, she has held the Bicentennial Chair in American Studies, University of Helsinki and visiting professorships at Paris VII, the University of Melbourne, Tokyo Christian Women’s University, and University of Toulouse. She was PI for “Working at Living: The Social Relations of Precarity,” for “Enforcement Strategies for Empowerment: Models for the California Domestic Worker Bill of Rights,” and “The Labor of Care.” She is part of the research network on domestic work.  Her current project is “Stranded: Migrant Domestic Workers Seeking Justice,” a history of less than free labor, the employment broker, Black and Puerto Rican migration, immigration, the regulation of domestic work, and those who fought back in the US and globally.