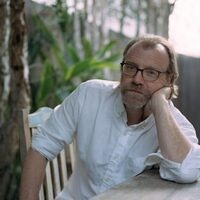 One of the most important and blazingly original writers of his generation, George Saunders is an undisputed master of the short story, and his surreal, experimental first novel, Lincoln in the Bardo, won the Man Booker Prize in 2017. Saunders’ signature blend of exuberant prose, deep humanity and stylistic innovation has helped change the trajectory of American fiction – and earned him a MacArthur “Genius” Fellowship and a shelf full of other prizes. But as The New York Times puts it, “aside from all the formal invention and satirical energy of Saunders’s fiction, the main thing about it… is how it makes you feel.”
“George’s career has been a 20-year praise-song to the power of language, the grandeur of the visible world, and the awesome possibility of genuine enlightenment.” – Zadie Smith, Interview Magazine
“You feel as if he understands humanity in a way no one else quite does, and you’re comforted by it.” The New York Times