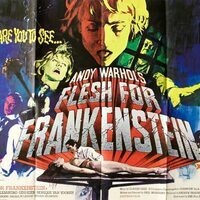 The Frankenstein film series continues with Paul Morrissey’s cult classic Flesh for Frankenstein (1973), which has been celebrated as a joyful mashup of high and low art. Originally marketed in the United States as Andy Warhol’s Frankenstein,though Warhol reportedly had no part in its creation, the film owes its lineage both to avant garde and art cinema practices, as well as contemporary European sexploitation and horror films. Flesh for Frankenstein premiered in Space-Vision 3D and was originally rated X by the MPAA due to its explicit sexual and violent content, though the film is most often experienced as highly comedic for its tongue-in-cheek scenery-chewing performances and parodic, even slapstick, violent and sexual excesses. The film centers on attempts by Baron von Frankenstein (Udo Kier) to create a superior race by assembling perfect male and female specimens from parts of corpses.