Finding Courage: Film Screening and a Discussion with the Filmmakers 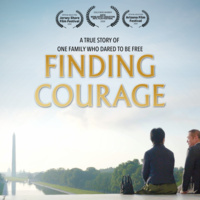 Finding Courage is a true story of a former Chinese journalist living in exile in San Francisco, desperately trying to reunite her broken family and get justice for the murder of her sister. Her family’s courageous undertaking to collect evidence and bring their story to the world is moving and eye-opening. This is a timely film that unravels the story of one family persecuted for their faith in China.
We are also inviting the Director of the film, Kay Rubacek, for a Q&A session following the screening. Ultimately, we wish to, even in such grim times, help others, using the filmmakers’ words, “believe in and see for ourselves a simple phrase manifest in reality, love is the greatest force there is.”
The documentary has screened in film festivals across America since May this year, winning top accolades, such as a Gold Remi Award at the 53rd Houston International Film Festival (one of the longest-running, and largest film and video competitions in the world) and Best Feature Film, Audience Choice Award, at the Jersey Shore Film Festival.
This free online screening will be hosted on Eventive. Please RSVP to receive the movie link. A link and instructions will be emailed to all RSVPs 48 hours before the screening.