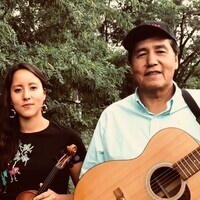 As part of UCSB Ethnomusicology Forum, Métis fiddler Jamie Fox will perform on Friday, October 11, 2019 from 5:15 to 6:30 pm at the UCSB MultiCultural Center Theater. Jamie is a Métis fiddler of the Aaniih and Nakoda tribes of Montana. The Métis are members of ethnic groups native to Canada and parts of the United States that trace their descent to both Indigenous North Americans and European settlers. Jamie grew up on the Fort Belknap Reservation of Northern Montana where she was immersed in a lively fiddle and dance tradition. She will perform selections from the tunes played there, derived from a mixture of Celtic, French, and Native American cultures, and some other “popular” Métis tunes that are played throughout Native country. She will be accompanied on guitar by her father, Jim Fox.

Sponsored by the UC Santa Barbara Department of Music, Ethnomusicology Program, and MultiCultural Center, with the American Indian and Indigenous Collective (AIIC)