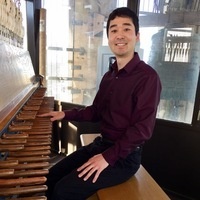 UC Santa Barbara University Carillonist Wesley Arai will present a recital from the carillon in UC Santa Barbara's Storke Tower on Sunday, November 7, 2021 at 2 pm PT. Listeners are encouraged to bring a blanket or lawn chair to sit on the grass outside the tower during the recital.

This is a live, in-person event.

For those who cannot attend in person, this event will also be streamed live via the Department of Music's YouTube channel at this link: youtu.be/NQ8RO-iHhMw