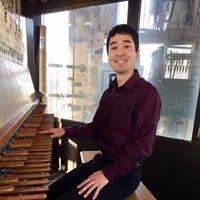 UC Santa Barbara University Carillonist Wesley Arai will present a recital from the carillon in UC Santa Barbara's Storke Tower on Sunday, October 17, 2021 at 2 pm PT. The program will feature arrangements of folk songs, well-known classical music, and ragtime by students of the UCSB Carillon Studio, as well as works composed for the carillon covering a wide array of styles. Listeners are encouraged to bring a blanket or lawn chair to sit on the grass outside the tower during the recital.

The student arrangements featured in this recital are products of the Spring 2020 carillon class, by current and former students Andy Huang (Class of 2021), Emily O’Mahony (Class of 2022), and Keith Sibal (Class of 2021). Due to the COVID-19 pandemic, the class shifted its focus from carillon performance to topics such as arranging and composing for the carillon, acoustic and harmonic considerations unique to the carillon, and the history of the carillon. Since the carillon was silent for over a year due to the pandemic, this is the first time these student arrangements will be heard on the bells of Storke Tower.

This is a live, in-person event.

View the program as a PDF

For those who cannot attend in person, this event will also be streamed live via the Department of Music's YouTube channel at this link: youtu.be/sc4rgpmrvxQ

Our commitment to your health and safety

Please review the Department of Music's COVID-19 Health and Safety Protocols prior to attending this in-person event.