Diversity of #MeToo: How Low Wage immigrant Workers Are Fighting Back Against Sexual Harassment 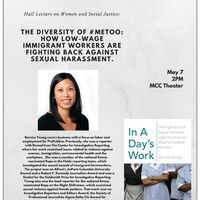 Bernice Yeung covers business with a focus on labor and
employment for ProPublica. Previously, she was a reporter
with Reveal from The Center for Investigative Reporting
where her work examined issues related to violence against
women, immigration, environmental health and the
workplace. She was a member of the national Emmynominated
Rape in the Fields reporting team, which
investigated the sexual assault of immigrant farmworkers.
The project won an Alfred I. duPont-Columbia University
Award and a Robert F. Kennedy Journalism Award and was a
finalist for the Goldsmith Prize for Investigative Reporting.
Yeung also was the lead reporter for the national Emmynominated
Rape on the Night Shift team, which examined
sexual violence against female janitors. That work won an
Investigative Reporters and Editors Award, the Society of
Professional Journalists Sigma Delta Chi Award for
investigative journalism, and the Third Coast/Richard H.
Driehaus Foundation Competition. Those projects led to her
first book, In a Day's Work: The Fight to End Sexual Violence
Against America's Most Vulnerable Workers (The New Press,
2018), which just won Pen/Galbraith Award for Nonfiction.