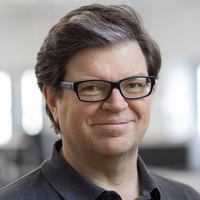 The Department of Statistics and Applied Probability welcomes Yann Lecun, vice president and chief AI scientist at Facebook and founding director of the NYU Center for Data Science, in the talk "Self-Supervised Learning," for its continuing Distinguished Lecture Series in Data Science. In addition to the public event at Corwin Pavilion, the lecture will be live-streamed at http://live2.id.ucsb.edu.

Deep learning has enabled significant progress in computer perception, natural language understanding and control. But almost all these successes largely rely on supervised learning, where the machine is required to predict human-provided annotations, or model-free reinforcement learning, where the machine learn actions to maximize rewards. Supervised learning requires a large number of labeled samples, making it practical only for certain tasks. Reinforcement learning requires a very large number of interactions with the environment (and many failures) to learn even simple tasks. In contrast, animals and humans seem to learn vast amounts of task-independent knowledge about how the world works through mere observation and occasional interactions. Learning new tasks or skills require very few samples or interactions with the world: we learn to drive and fly planes in about 30 hours of practice with no fatal failures. What learning paradigm do humans and animal use to learn so efficiently? I will propose the hypothesis that self-supervised learning of predictive world models is an essential missing ingredient of current approaches to AI. With such models, one can predict outcomes and plan courses of actions. Good predictive models may be the basis of intuition, reasoning and "common sense", allowing us to fill in missing information: predicting the future from the past and present, or inferring the state of the world from noisy percepts. One could argue that prediction is the essence of intelligence. After a brief presentation of the state of the art in deep learning, some promising principles and methods for self-supervised learning will be discussed.

Yann LeCun is VP and Chief AI Scientist at Facebook and Silver Professor at NYU affiliated with the Courant Institute and the Center for Data Science. He was the founding Director of Facebook AI Research and of the NYU Center for Data Science. He received a PhD in Computer Science from Université P&M Curie (Paris). After a postdoc at the University of Toronto, he joined AT&T Bell Labs, and became head of Image Processing Research at AT&T Labs in 1996. He joined NYU in 2003 and Facebook in 2013. His current interests include AI, machine learning, computer vision, mobile robotics, and computational neuroscience. He is a member of the National Academy of Engineering.